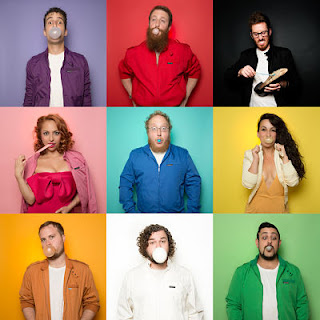 About:
Turkuaz is a 9-piece "powerfunk" army hailing from Brooklyn, NY, whose modern twist on the classic sound has placed them at the forefront of a new funk revolution. Their hooky group vocals and hard-hitting horns have brought dance floors to life across the country. Their vibrant color coordinated outfits and theatrical delivery create a lively visual circus, attesting their liveliness on stage, as well as in the studio.

With the obvious influences such as Parliament, Sly & The Family Stone, Rick James and Earth, Wind & Fire as a starting point, Turkuaz adds healthy doses of jittery, world-pop-dance grooves. The band is a refreshing update to the funk idiom that, as described by Live For Live Music, "will raise the roof on any given night."

The band has just dropped their full-length album, Digitonium, released earlier this month. The 24-track album has more of a funky 80’s rock feel than their first (Future 86, 2014), and is described by the band as a concept album with its "Dada-esque slurry of words and lyrical imagery.”

Turkuaz's show is not one to miss. Daytrotter recently called the band “a cross between Talking Heads and Jesus.” Currently they are in the midst of a national Fall tour in support of Digitonium. They have hit venues and festivals such as North Coast Music Festival (Chicago, IL), Catskill Chill (Hancock, NY), Higher Ground (Burlington, VT), Brooklyn Bowl (Brooklyn, NY), and Paradise Rock Club (Boston, MA.) On Tuesday, November 10 you can catch the band at Zydeco in Birmingham.

Lots of exciting things are happening in the world of Turkuaz and we'd love for you to come out and experience their funk phenomenon!
http://www.turkuazband.com/
https://www.facebook.com/turkuaznation
https://twitter.com/turkuaz
https://instagram.com/turkuazband

"There is a feeling of electricity and explosive color that comes from [Turkuaz's] sharp guitar riffs and horns, and a deep funky synth that brings to mind an 80s dance club" – GLIDE MAGAZINE

“Alongside funk appeal and palpable influences of George Clinton and Sly and the Family Stone, Turkuaz -- who describe the sound as 'Powerfunk' -- adds the catchy pop and groove of Talking Heads and Motown-inspired tunes.” – KDHX

"Turkuaz's rapid ascension to relevance can be aptly compared to how fast and focused they play onstage."
–RELIX MAGAZINE
Posted by Unknown at 10:19 AM No comments: 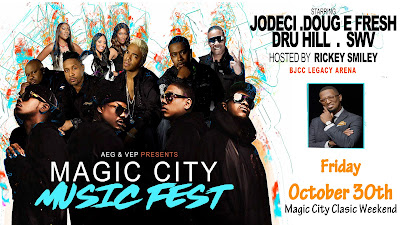 Residents and visitors to the “Magic City” are in for a musical treat during one of Birmingham’s liveliest weekends with the arrival of the Magic City Music Festival. The star-studded concert experience, presented by Coca Cola and Aaron’s, will provide attendees with a soulful journey down memory lane as they enjoy chart-topping hits from the ‘90s, ‘00s and today delivered by legendary R&B, Soul and Hip

JODECI maintains the distinction of being one of the most successful R&B groups of the ‘90s releasing several multiplatinum albums that included chart-toppers like “Forever My Lady” and the well-received remake of Stevie Wonder’s classic “Lately.” The group recently reunited for a reunion tour, much to the excitement of thousands of fans nationwide.

DRU HILL scored seven number one singles on Billboard’s Top 40 during the group’s hottest run in the 90’s. Shortly after that, lead singer Sisqo had a successful solo career with hits like “The Thong Song.” Today, the group reunites on stage with an amazing show and an impressive musical catalogue.

SWV —short for Sisters With Voices—broke through in 1992 with a multi-platinum debut album named It’s About Time, which featured multiple R&B favorites, including the classic “Right Here.” The group recently announced the release of a long-awaited new album titled “Ain’t No Man,” which will be released on October 30th, the day of the Festival.

DOUG E. FRESH is often recognized as one of the best entertainers in the business, and he continues to wow audiences with his ‘human beat box’ ability. No one rocks a crowd like hip hop veteran Doug E. Fresh!

RICKEY SMILEY is a native of Birmingham and definitely a hometown hero and favorite. His nationally syndicated radio show continues to be a fan favorite in over 52 cities, and his comedic talent remains well received at comedy shows and festivals across the country. 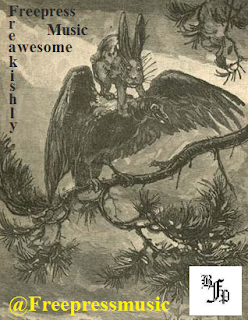 One important strategy here at BFP is for us to remain completely unpredictable and inconsistent.

We find that as long as we keep moving, the "powers that be" seem to find it harder to eradicate the growing mob that is the BFP community.

What might seem like unprofessional, erratic, unplanned behavior is in fact part of our long term master plan to free Birmingham from the clutches of Evil. Yes...I said evil.

Freedom is the goal for which we unabashedly and sleeplessly strive!  We will not rest until the Birmingham area is free to share. Free to listen! Free to LOVE!

So, yep... This is our roundabout way of saying we have to make a slight change to our tagging system. Trust us, it's all woven into the master plan of freedom. So learn the new self-serve tagging system and you too can be free and spread freedom, like a hero.

As many of you are aware, as indicated by the many people who have adopted its use, we created a tagging system. "Don't nobody own it" says Lee Waites of Freepressmusic. "We use it. Cause it's awesome! But anybody and everybody can use it too. Then they ain't gotta count on no other people to share the stuff they make. It's, y'know, like freedom, like Thomas Jefferson, and George Washington. It's like things is meant to be until some ass-hat takes stuff and tells you you gotta buy it back from them cause they put a bow on it or something."

Although BFP (FreePressMusic) maintains an internal list of widgets to monitor and share this system it is available for the entire community, to whom it is offered freely and in good faith and for whom we encourage its use. See this link for our widget list: http://birminghammusicnews.blogspot.com/p/blog-page_11.html

"Sorry I didn't think of everything when I dun thinked it up," says Waites "but ain't nobody perfect and this new way is better and besides, change is good."

When the BFP tagging system was first initiated, it contained a simple three part system: Hashtag Bham, followed by hashtag month, followed by hashtag day of the month. For example- #BhamOct22. In the planning and implementation of this tagging system it was "assumed" says Waites, that the tags would be simple and the date tags of each different social media platform would allow for a clear distinction between the days and dates of different years.

"Well" says Waites "we all know what they say about asses and zooming and stuff, and what comes between a man and a woman, or a man and a man, or a woman and a woman, and, y'know, it's almost 2016. Times are changing. We ain't judging nobody. It's just a tagging system for events and music and, well, whatever."

The new tagging system is slightly more complicated. The old system, which contained the 3 parts mentioned above, has been replaced by the new system, which now contains 4 parts. I bet some of you can guess what that fourth part is before you even read it. Yes...A year! So...instead of #BhamDec22 it will, BEGINNING IN DECEMBER OF 2015, read #Bham2015Dec22. I repeat. The new tagging system does not take effect until December of 2015. From that point on there is no foreseeable need for change. At least, at this time, we do not assume there will be. 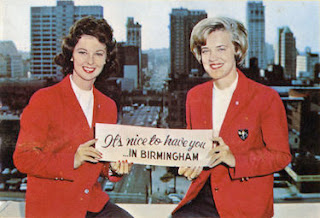 Posted by Unknown at 2:09 PM No comments: