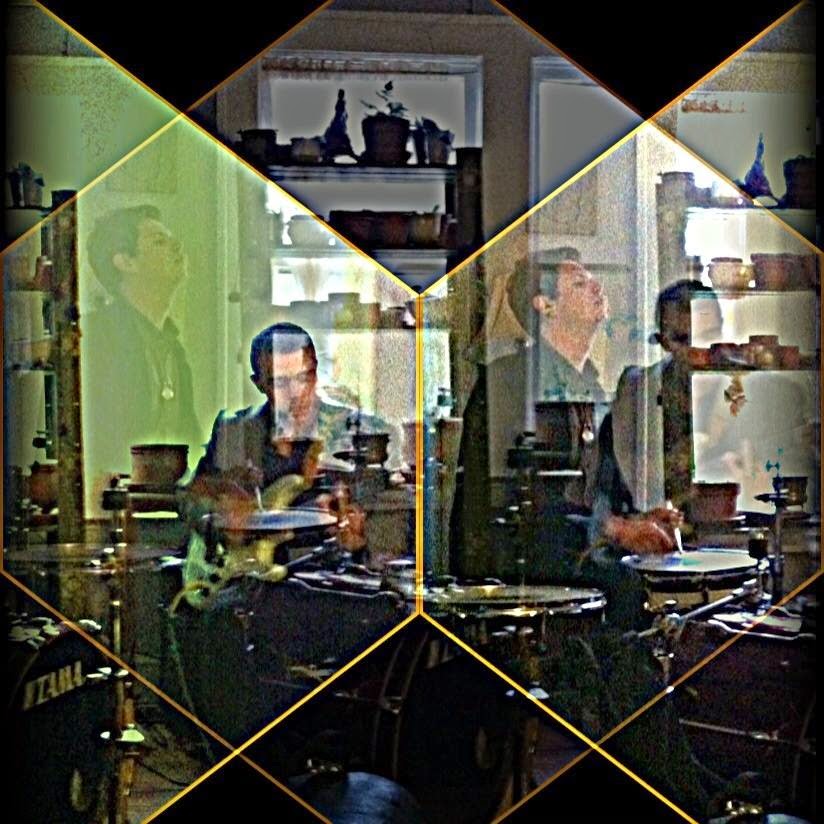 Up-and-coming Atlanta art rock and post-punk band, Slang, are kicking off their two-week long May tour at the Nick Rocks in Birmingham on Monday, May 11th.

Posted by Unknown at 9:44 AM No comments: 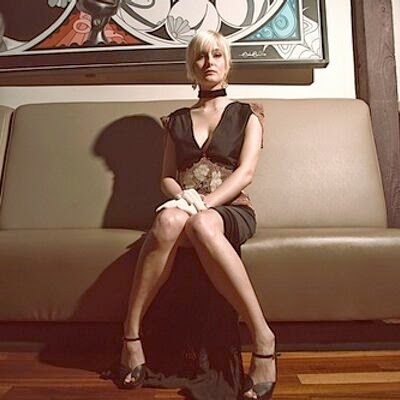 "Hey y'all! Jordan Igoe here from Charleston, SC. On 5/7 I will be playing the late show at The Nick! Mackie Boles will be playing lead guitar and my beautiful sis, Jessica Daisi, will be singing sweet harmonies."


"Here are a few videos of both acoustic and full band performances! Please enjoy them, and we will look forward to meeting you on the 7th!"


Jordan Igoe - It's Not Me (Featuring Rachel Kate) from Daniel McCord on Vimeo.

Posted by Unknown at 3:48 PM No comments: 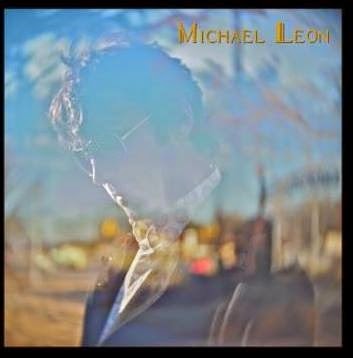 A renowned drummer for more than 22 years, Michael Leon (also known by his peers as "Mikey D") was a founding member of Birmingham, AL's 13Ghosts, and has lent his talents to the likes of Regia, Shame Idols, and Gleeson (Austin, TX) among many others. He is a multi-instrumentalist who has always tried to absorb as many different styles of music as one could possess and is constantly experimenting and writing in the studio. His eponymously-titled solo debut – a joyous and fuzzy Power Pop romp – is now available wherever digital music is sold or streamed.

“I had been wanting to make a record for a while,” Michael Leon says of the impetus behind his debut album, Michael Leon. “Once I had my home studio set up, I just started going through songs I had written and tracking them out.” A sought-after drummer, Leon was ready to create a more personal statement. He used the relaxed timeframe of a home-based project to develop and complete various musical ideas. “Some were riffs I had laying around that I finished during the recording process, and others were written on the spot.” He also chose to play nearly all the parts himself, a decision which complicated things. “I wish I had a time lapse video of when I was recording. I would be setting up mics, setting levels, then running across the room to play the tracks. It was pretty crazy but fun too.”

Joining him are album co-mixer Chris “Frenchie” Smith (of Austin, TX noise-poppers Sixteen Deluxe), who contributes synth and lead guitar parts; Jason Rice, who plays piano on ‘Amazed’; and Don Tinsley, who handles bass duties on “Till I Met You” and “Sunshine.” Rounding out the team are Sean Rolie, who partnered with Smith on the mix, and Jason Hamric on mastering. The album itself, which took about a year and a half to complete, reflects Leon’s history as both a player and a consumer. “I have many influences, but as far as which ones I drew from, I would say my former bandmates in 13Ghosts, Brad Armstrong and Buzz Russell, as well as Elliott Smith, Big Star, Beatles solo records (Paul McCartney was Leon’s chief inspiration for the “Off The Floor” video),


Guided By Voices, Foo Fighters, The Zombies... they are all kind of intertwined in some way or another.” Recalling, at times, 60s psychedelia, 70s guitar pop, and 90s alternative rock, the songs on Michael Leon have a classic sensibility surging through them. A casual listener could easily mistake the album for some lost gem, the type of thing you unearth on vinyl at a yard sale and wonder why you never heard of it.

A mission statement of sorts is thrown down early on standout track “Off the Floor,” when Leon bellows “Some think it doesn’t exist anymore/ I feel that rock and roll is still worth fighting for” over guitars that alternately jangle and crunch. The defiance of that statement is sewn into the album, suggesting decades of experience learning from mistakes, picking oneself up, and getting on with it. Themes of regret are served up with a tenderness that lends tracks like the sweet “Country Fair” or the delicately catchy “Running Away” a genuine poignancy, and which makes “Amazed” into a ‘lighters-up’ weepy ballad in the grand arena rock tradition. In all these instances, there’s a fragility to the vocal performances that draws you in. Amongst the album’s darker passages is “Suicide Pig,” which rides a cyclical guitar line into the depths of isolation and depression while still, like all the of the songs here, delivering a surfeit of hooks. That level of song-craft is consistent, and the arrangements, even when Leon sends you adrift on the bent folk of “Long Way Back,” are layered and well-considered, while never fully shedding the homespun quality that gives the proceedings considerable charm. Fans of one-man-band albums like those by Jason Falkner and Todd Rundgren will appreciate the detail-oriented production.

Even so, don’t over-think it. This record wants to be played loud, with the windows down, as you tear down the road between dumb things you have to do. And despite the vintage thrills, don’t call it a nostalgia trip. Leon asks, “Are you living in the past?” on the acoustic intro to “Only One,” and it’s not just a question but an accusation. Michael Leon may have his eye on the musical pleasures of days gone by. But he’s moving forward.
Posted by Unknown at 12:18 PM No comments: 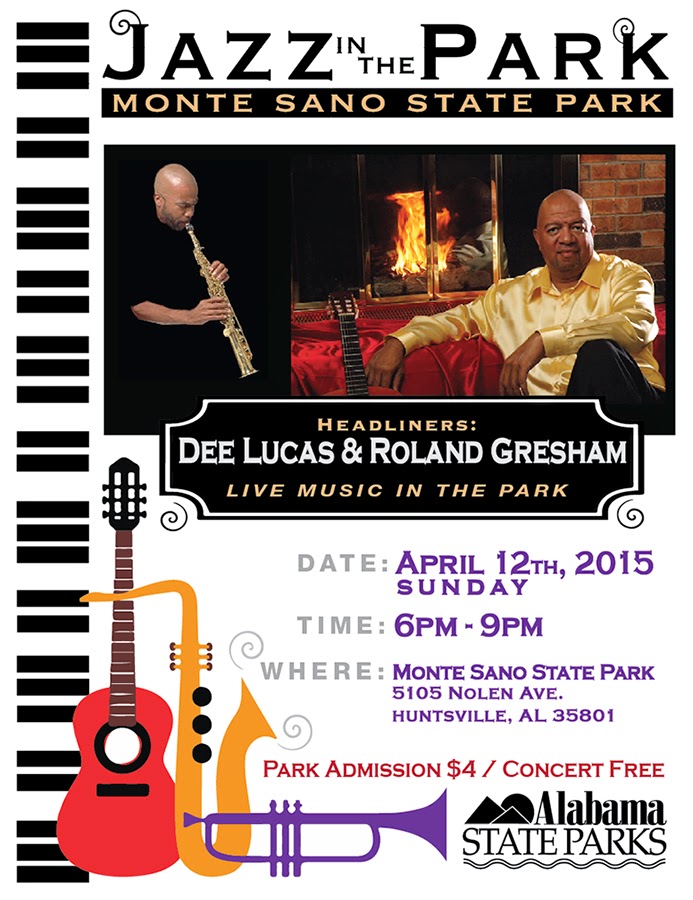 Magic City Smooth Jazz in Birmingham is partnering with Alabama State Parks to present a free concert at Monte Sano State Park on April 12, from 6-9 p.m.

The concert will feature Dee Lucas on soprano sax and guitarist Roland Gresham. The concert is free, but park entry fees apply ($4).

From supporting jazz artists in Alabama to attracting national acts such as Esperanza Spalding, Lockhart said that the mission of Magic City Smooth Jazz is to increase access to cultural activities for all Alabamians.

“We’d like to enhance the cultural arts in underserved communities by supporting area jazz musicians and educating youth and adults through music workshops and free concerts like the one at Monte Sano,” Lockhart said. “Our goal is to cover the entire state. What better way to do that than through state parks.”

Jazz in the Park is made possible through individual contributions and by groups such as the Alabama State Council on the Arts. For more information about Jazz in the Park, call Bernard Lockhart at 205-616-1735 or visit magiccitysmoothjazz.com.

The Alabama State Parks Division operates and maintains 22 state parks encompassing approximately 48,000 acres of land and water. These parks rely on visitor fees and the support of other partners like local communities to fund the majority of their operations. To learn more about Alabama State Parks, visit www.alapark.com.
Posted by Unknown at 5:54 PM No comments: 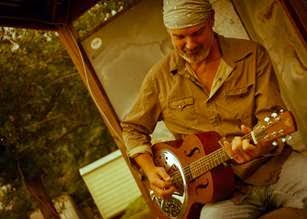 Tony Brook just released his 6th and 7th full length records, "Live from the 280 Boogie", (listen to selected cuts here ) with longtime sideman Evan Maddox on Bass and Drew Kilpatrick on Drums, the first ever live record released from   the  music festival from Waverly, Alabama, and "Songs from the 20th Century" with cuts written by Brook back in the 20th Century. It contains live cuts as well as studio cuts of popular Brook songs with a few special guest musicians.
Tony's popularity has been growing since he has been touring Great Britain from South Hampton to Aberdeen and all points in between, including several appearances on BBC Radio with Stephen Bumfrey and Keith Greentree .
A critically acclaimed songwriter, Tony Brook songs have been recorded by Legendary Alabama Blues Man, Billy Earl McClelland, the late Wayne Mills, and Kenny Heard to name a few.
Tony has played Venues across the U.S. and Europe (watch videos here) and has performed with the likes of Lucinda Williams, Steve Young, Johnny Neal, Tanya Tucker, Waylon Jennings’ Band.
Tony has opened up for such acts as Willie Nelson, Ray Charles, Government Mule, Tensely Elis, and Sam Bush.

In addition to his two latest releases Tony has written, recorded and released:

Tony Brook releases can be found at: