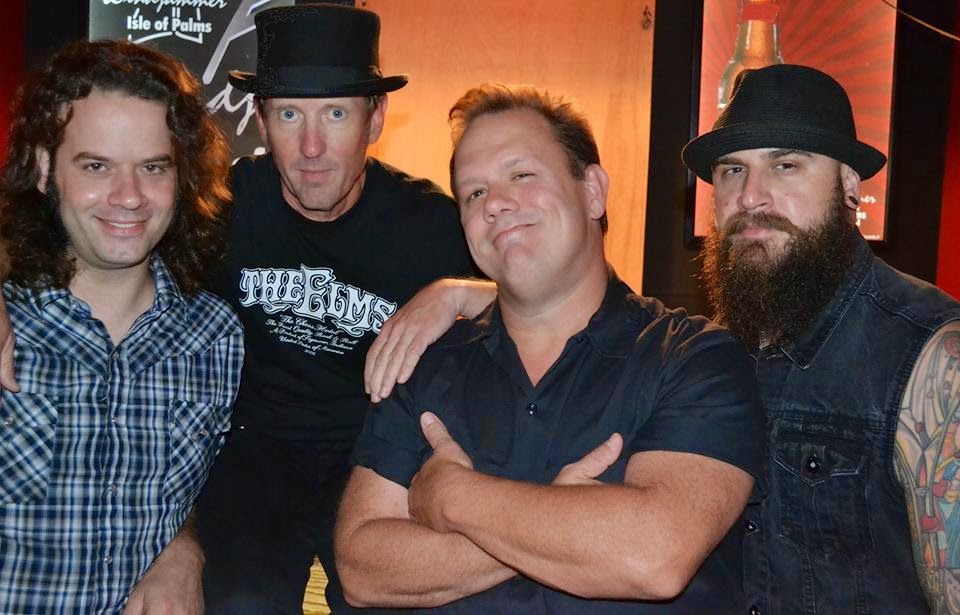 New Orleans, LA -- With a clatter of percussion and a blast of electric guitar, Cowboy Mouth rips into the band's 10th album, Go!, with the ferocity of a band that's been there, done that... and can't wait to do it all again.


"I'm just a little older, but I ain't dead yet!" frontman Fred LeBlanc sings during the title track, summing up the album's "seize the day" message in three short seconds.


Produced by Don Miggs, Go! is one of the band's most collaborative albums to date, with drummer/singer LeBlanc leaning heavily on his three bandmates -- bassist Casandra Faulconer, guitarist Matt Jones, and co-founding guitarist John Thomas Griffith -- to create something that reaches far beyond the band's trademarked sound. It's a wide-ranging mix of electric blues, rockabilly, punky pop and guitar-oriented rock & roll. Or, as LeBlanc puts it, "Go! is a strong collection of songs played by four really great musicians... or three great musicians and a drummer who happens to sing."


Self-deprecating humor aside, Go! delivers proof that Cowboy Mouth hasn't lost its bite after two and a half decades of rootsy rock & roll and a never ending string of rowdy concerts. LeBlanc has always prided himself on the band's strength as a live act, which he sees as the focal point of his career.


With Go!, the band is selling both. It's a loud, lively album steeped in the energy of the band's concerts, anchored by a theme that LeBlanc says is central to every Cowboy Mouth show.


Go! can be purchased at the following sites:


For more information on Cowboy Mouth:

There's a new club opening up where Aqua, Lakeview used to be. The grand opening of ESCAPE is Saturday, March 14 at 10pm.

The line-up features a long list of DJs and promises to be an all night dance party. 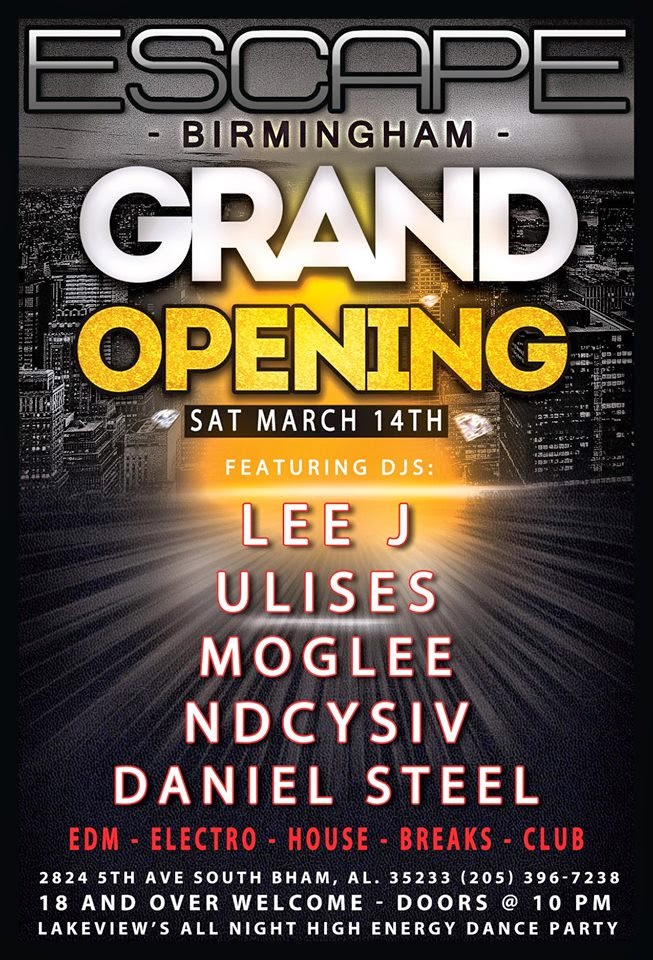 Here's to @BottletreeCafe, and How Sucky That They're Going Away 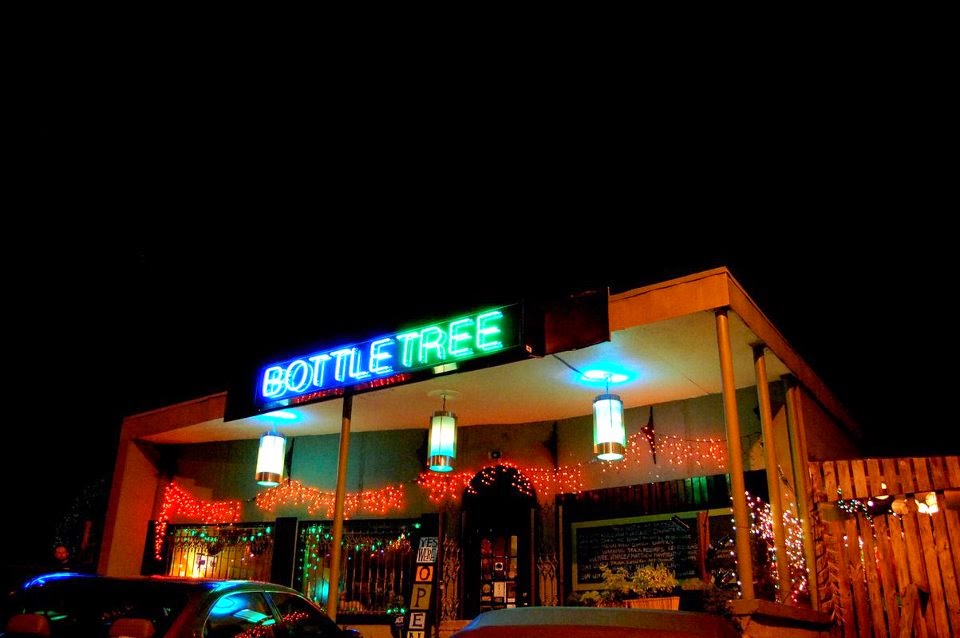 Most everything I post, write or print about Birmingham is as devoid of myself as I can make it. With the exception of the very few extremely self indulgent pieces which are very personal to me.

This is one of those.

When Bottletree was but a twinkle in the eye of a couple of local artsy types, I was running a small renovation company. My crew was working on a house in Avondale, I believe putting a roof on, when we were approached to put some gutters on the house where Merrilee and Brian were living.

We were all kind of artsy-ish and started talking about this and that and other things.

Not too much later, I got a call about helping them with a little work on a start-up bar in an old abandoned building on the edge of nothing Birmingham.

They were making things work on a shoe-string budget, they explained, and couldn't contract out the whole job. Most of the work was accomplished by their friends and acquaintances, of which I am now one (I count them both friends, although not close and cuddly). I will always be glad I met Merrilee, Brad and Brian back then, and got a chance to see it all go down.

I believe my crew helped with a few tasks, the main one, tearing out the old garage door, a daunting and dangerous apparatus which was held together by old, giant, flingy-flangy steel cables and springs designed to kill and maim anyone foolish enough to approach it. This was located over what is now, and unfortunately soon to have been the sound board.

Small thing, but I was always proud of walking into that place and ordering a beer, remembering how I almost got clocked by that old garage door. It was part of the personality of what I had seen grow from a baby.

I will have to console myself with the notion that what was born there was a spirit, which can move on into new territory. Because for the longest time, when I went out, if I went out, I would begin at Bottletree and end up at Marty's. Now, Marty's is no more, and Bottletree will soon be a fond memory.

Back in the last cycle of the print version of The Birmingham Free Press (which, I warn you, may crop up again at any time), Bottletree was always very supportive of our efforts, as they have been with many local endeavors. They just exuded a positive energy that is hard to match.

I'm completely looking forward to the opening of Brian Teasley's new Saturn joint. It will undoubtedly be amazing. But for now, I'm indulging in my "old man-ness" and lamenting the loss of another GREAT Birmingham establishment, and tradition.

I want to personally thank all of the staff and most of the people I encountered there, for being part of a truly awesome and incredible Birmingham thing. The bar and kitchen staff were always top notch.

And I want to wish the staff GOOD TIDINGS AND HAPPY LANDINGS! You can soothe yourselves with the knowledge that nothing lasts forever, but you were there.


“We’re Banditos and we are playing with the Deslondes at Bottletree on March 5th. Come on out and get a taste of some new tunes!”


IN BRIEF:
Back in March 2014 we saw Nashville-via-Birmingham, AL group Banditos at one of those fly-by-night, hole-in-the-wall bars that sprout like skunkweed on Sixth Street in Austin, TX during the height of SXSW crazy. The only other patrons were Bud Light-swilling bros watching a blowout college basketball game; the sound system at this place was a painful mix of all treble and reverb; and the noises oozing out of the PA during another band's set were not unlike the distorted echoes of the soundtrack to Suspiria (and not in a good way). We wish we were kidding.

Then the six-piece Banditos took the stage, and even though they themselves were a little intimidating - all hair, denim, and stoic determination - the sounds they managed to conjure from two overworked speakers were fresh, raw, and spectacular. We were instantly blown away and are now thrilled to announce Banditos have signed with Bloodshot Records and will release a new album sometime in early 2015.

With the rugged power of a flashy Super Chief locomotive, the Banditos bodaciously appropriate elements of '60s blues-fused acid rock, ZZ Top's jangly boogie, the Drive-By Truckers' yawp, the populist choogle of CCR, Slim Harpo's hip shake baby groove, gut bucket Fat Possum hill country mojo and the Georgia Motherfucking Satellites. From backwoods bluegrass, to slinky nods to Muscle Shoals soul and unexpected bits of doo-wop sweetness, the Banditos recall many, but sound like no one but themselves.

-Josh Zanger – a guy at Bloodshot Records
Posted by Unknown at 11:51 AM No comments: